END_OF_DOCUMENT_TOKEN_TO_BE_REPLACED

Kudos to Jim on breaking this news. Now let’s talk about where we go from here. END_OF_DOCUMENT_TOKEN_TO_BE_REPLACED

END_OF_DOCUMENT_TOKEN_TO_BE_REPLACED

Summer league is complete, LeBron and Love are settled in Cleveland, Packer season is upon us and the Brewers are in a tight division race. All reasons why the NBA and new arena will likely slip from the minds of Bucks fans for the next 60-days.

We want to use this opportunity to offer our thoughts on where the new arena should be located and how the building should be designed taking into account some of the lessons learned from the 1985 construction of the Bradley Center. Strap in and let’s go!

END_OF_DOCUMENT_TOKEN_TO_BE_REPLACED

Are the Bucks saved yet?  Not quite. We’ve still got that messy arena project ahead of us. Only when the new arena is underway can we relax under the assumption the team is then locked into Milwaukee for the long-haul.

That said, it has become evident to us over the past week that when fans and NBA historians will look back at what saved the Bucks, the answer will be clear: The turning point was the 2011 Collective Bargaining Agreement (“CBA”) between the players union and the owners that came about as a result of the lockout.

Senator Kohl and his staff were critical players behind the scenes in the negotiation of this agreement, primarily as it relates to how small markets are treated. Did the small markets get everything they wanted with the 2011 CBA?  No, but it becomes clearer by the day they got enough, as evidenced by LeBron James decision to return to small-market Cleveland.  Let’s discuss!
END_OF_DOCUMENT_TOKEN_TO_BE_REPLACED

We thought we’d take this time for some thoughts coming off this past week’s umm, interesting series of events.

As it relates to the head-coaching position, the Bucks experienced a significant upgrade with the hiring of Jason Kidd. After a rough start, by all accounts Kidd made significant adjustments in New Jersey last season, allowing the team to finish with a 34-17 record down the stretch, including reaching the second round of the playoffs. He employed some creative lineups and helped reclaim the careers of a few veterans as well. Kidd appears to hold significant promise as a coach in the NBA and we welcome him to Milwaukee.

Our questions of Kidd relate to his future input into player personnel matters. We at SaveOurBucks.com have been consistently in favor of an organizational model whereby the Bucks locate and hire a sharp General Manager, and provide that person with full organizational control. The GM in turn then hires their own coach, much like the model employed by the Green Bay Packers in 1991 when the team hired Ron Wolf, and he in turn identified his coach, sending a second round draft pick to the San Francisco 49’ers as compensation to free Mike Holmgren from his contract to come to Green Bay. That model is the one that works more often than not and has the fewest inherent conflicts. Models where there is an unclear delineation of power between the owner, coach and GM aren’t always the most successful.
END_OF_DOCUMENT_TOKEN_TO_BE_REPLACED

If you thought the Bucks received a tremendous amount of national publicity for the selection of Jabari Parker, you are correct. Amazingly though, that level of coverage is now being eclipsed by the rumor that “current” Nets coach Jason Kidd is interviewing (or has interviewed) for the position of President of Basketball Operations (“POBO”) with Milwaukee.

We’ll examine the pros and cons of this situation from the perpsective of one of the cornerstones that this site is built on, namely the goal that the Milwaukee Bucks locate and hire their version of Ron Wolf, the man the Packers turned to in 1991 to change the team culture and turn the operation around.

Before we begin, a few housekeeping items. President of Basketball Operations is considered a higher title than General Manager. For some teams their POBO also serves as their GM. All indications from media reports are that Kidd is interviewing for the POBO position and not necessarily for the position of Head Coach. Kidd being offered and accepting the POBO position though wouldn’t necessarily preclude him from being the coach either now or in the future. It just would be an unusual situation as most POBO’s around the league are not their team’s head coach.

END_OF_DOCUMENT_TOKEN_TO_BE_REPLACED

We have a few observations on what all went down last week and wanted to share them — better late than never! END_OF_DOCUMENT_TOKEN_TO_BE_REPLACED

END_OF_DOCUMENT_TOKEN_TO_BE_REPLACED 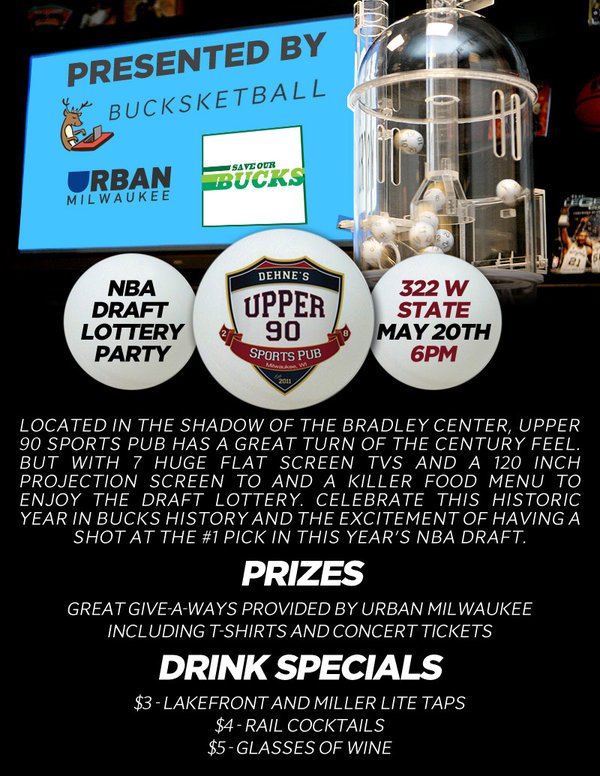 Earlier this season Save Our Bucks declared that “Winning Takes Balls” by putting up a billboard urging the Milwaukee Bucks to invest in the NBA Draft Lottery to acquire a franchise player and help bring our franchise back to glory.
END_OF_DOCUMENT_TOKEN_TO_BE_REPLACED