Kudos to Jim on breaking this news. Now let’s talk about where we go from here.

The Journal Communications Building site has always been the preferred location for us. We outlined the reasons why in this piece from three-months ago. The Journal building site provides adequate traffic ingress and egress, riverfront vistas and can help tie together development on the east and west sides of the river. 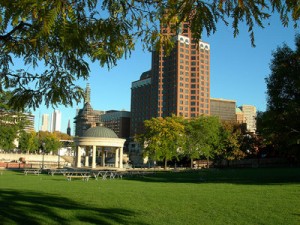 That said, we caution people not to jump to conclusions that this site is definitively where the new arena will be built. For those who remember the “site wars” that took place in 1985 over the construction of the Bradley Center, they will know that the preferred location for the building shifted a few times. An Old World 3rd Street location (Aloft Hotel site) and the Miller Park grounds (then County Stadium) were both Bradley Center location front-runners for a brief time.

What the unveiling of the Journal Communications site does is simply start the process of vetting the location. This will include the political battles from people and vested interests who prefer other locations along with actual design work to see if that site can physically handle the new building. We are only in the third inning of a nine-inning ballgame.

Further, unless Edens and Lasry (do we need to include the many other minority Bucks investors in these references now?) have a plan B for that site as apartments or condos, they likely only enter into a purchase agreement contingent on all the other pieces coming together, including financing. They won’t close on the purchase until all those contingencies are handled. That said, having the site under their control via a purchase option will allow the process to go to an entirely different level.

No, it isn’t big enough.  Sure, you could fit the footprint of a building on the site but not the desired ancillary development and some connected parking. That’s why the intrigue will now move to the adjacent property owners.

You can’t expand to the east since Pere Marquette Park and the river are there. The south is blocked by Kilbourn Avenue and the Hyatt Hotel. That leaves the west and the old Arena and Milwaukee Theater buildings. It also means to the north, which means the block that contains Turner Hall, Maders, various parking lots and other bars and merchants.

We’d encourage our local arena story reporters to check the tax deed and ownership status of all the properties on the block to the north. As we noted in earlier articles, some parties are going to lose their building(s) in the name of progress. That said, the economic deal may make it very worthwhile for some adjacent property owners. By the way, we all own the old Arena and Milwaukee Theater as public buildings so there won’t be a windfall for the Wisconsin Center District (“WCD”) if those buildings are utilized, contrary to any assertions by WCD chairman Franklyn Gimbel.

As we talk about sacred cows, we also wonder about the future of the Milwaukee County Historical Society, who leases the bank building to the east of the Journal building. That building, owned by Milwaukee County, might be able to be repurposed into something different (or gasp…razed) as part of any new development.  Could that building be a sports pub?  A Bucks gift store and hall of fame? Or maybe take the Wisconsin Sports Hall of Fame from 4th street inside this building? There is some potential to tie that building into things with some creativity.

Can We Extend the Miller Park Tax?

Jim Owczarski’s article referenced an unnamed source who hinted the financing might come from an extension of the Miller Park District Stadium tax. There are two problems with this source of financing. The first is that we still don’t know when all the bonds from Miller Park will be paid off. The best the District has produced is an estimate that the tax will end sometime between 2018 and 2020. That is a 3-5 year span before the cash flow from that tax could provide meaningful debt service against a hypothetical $200 million in bonds issued for a public contribution towards the project. Now there are ways of structuring a new arena bond issue in 2015 using future revenue streams from the Miller Park District tax, but they aren’t as clean and cost effective as one might like.

The bigger problem with the Miller Park tax is the fact that extension of that tax is likely a dead issue based on the political realties of today. Extending that tax makes all the sense in the world except that it doesn’t. Too many political careers ride on that being a one-time tax.

That brings us the Super-TIF concept we have discussed here at length in past articles. With the new NBA TV deal, it is quite likely that two or three years from now, the Bucks will be running a payroll in the $110-120 million range, including salaries for players, front office, sales personnel, etc. Those salaries are all taxed in some method by the State of Wisconsin. And while some of the Bucks players need to pay a portion of their income tax to other states they play in, players visiting Wisconsin need to pay our version of that tax. (i.e. the jock tax)

Some estimates are that the Bucks organization will soon contribute between $8-$10 million a year to the State of Wisconsin in income taxes alone under the new TV contract. A Super-TIF would allow the State to create a new arena district to issue bonds for the project and use those Bucks specific income tax receipts to pay debt service on $200 million of long-term bonds. The Super-TIF could also encompass tax receipts on sales tax and property tax from arena operations and related developments. The bottom line is that there will be enough annual tax revenue to fund the public contribution for a new building WITHOUT implementing new taxes, but simply segregating existing taxes to fund the bonds.

Now, that will result in currently collected tax monies not being made available to the State of Wisconsin for other uses. But we will say it again – if the Bucks leave Wisconsin, all that tax revenue goes away anyways. And for the umpteenth time, we need to highlight for arena detractors that the Bucks tax revenue that leaves will NOT be replaced 100% with taxes generated by “replacement activities.”  As we’ve noted in the past, the Bucks are “takers” under the NBA’s economic system. Under the current revenue distribution and revenue sharing arrangements, far more money flows into Milwaukee from the league than flows out. This is outside money that results in local economic activity and tax revenue that will not be able to be “replaced” if we lose the Bucks.

Toss out all those “studies” that arena detractors cite saying that new buildings don’t result in more economic activity. They don’t apply to the unique economic circumstances of the Bucks in Milwaukee. If the Bucks leave, much of that revenue and those tax dollars leave with them and that is before we get to the typical points advanced in favor of a new arena, including increased economic activity and development, quality of life and national name recognition for Milwaukee.

So With That Said, Who Do I Vote For Next Week?

We haven’t seen the all-star ballots yet, but assume some Bucks will be on them! Ok, all kidding aside, this website is not endorsing any of the candidates for office. The Bucks are a community asset and SaveOurBucks.com counts as supporters people from all points on the political spectrum. There are scenarios where a new arena deal gets done under any outcome next week.

And that brings us to the great thing about the Milwaukee Bucks. They can bring together all of us for a common goal – a future NBA Championship in Milwaukee someday. The journey starts tonight with the home opener. Go Bucks!

One thought on “New Arena Site – The Journal Building”