We are grateful for all the work you have done the last 48-hours. We are making progress on a number of fronts in getting the arena funding bill passed. We put together a new FAQ below to help keep you informed as to where we stand as of 8:30pm on July 7th— and what to do next. Read on!

Q: Will there be a vote in the Senate tomorrow (Wednesday)?

A: Given that the State Senate has not put this on the calendar yet tonight, the bill might not get introduced and heard tomorrow. However, we wouldn’t necessarily read anything negative into that. The GOP has been bogged down trying to sort out their own issues over the Open Records Law and Prevailing Wage the past 24-hours. We wish that weren’t the case, but it is.

Q: Why are we so focused on the State Senate and not the State Assembly?  Both Houses must pass the bill for it to become law–right? END_OF_DOCUMENT_TOKEN_TO_BE_REPLACED

WHAT TO SAY WHEN YOU CALL – A PRIMER

Here is our FAQ on where things stand right now

A: Because right now legislators in Madison are debating whether or not to include the arena funding proposal in the State budget. They are talking about it while you are reading this piece. That is why calls now are critical. Don’t wait to make the calls.

Q: Can’t I just email my State Assembly representative and my State Senator?

A: You can, but legislative staffers tell us that calls carry far more weight than emails. Think of all the spam you delete everyday from your inbox versus someone calling you on the phone.

Q: Are they voting on it yet? END_OF_DOCUMENT_TOKEN_TO_BE_REPLACED

June 9th – 5:00pm Press Conference regarding the new arena with the people from Play It Forward

Here is what you need to know:

3- This is a public hearing with the County Board where they are requesting citizen input on the arena proposal and the sale of Park East land to the Bucks ownership for development. You will not be required to speak if you do not want to. The important thing is that you are there in Bucks gear

4- There may not be another event in Milwaukee that all Bucks fans can come to in order to rally for the arena. After tomorrow night, the action may shift back to Madison. This may be our only opportunity for an event like this.

5- The meeting may run a few hours, but if you can only come for the first hour, even that is helpful. It will be entertaining and interesting to observe.

It will be a beautiful 80 degree night at the lakefront. Come down for the scenery and stay for the meeting.

Now on to three losers as a result of this well thought out funding plan introduced today. END_OF_DOCUMENT_TOKEN_TO_BE_REPLACED 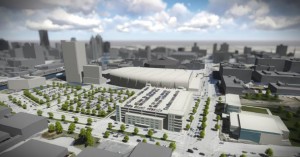 Many of you are asking where things stand with the arena. You are hearing a lot of hyperbole coming from a number of quarters. That tells us things are starting to get serious. END_OF_DOCUMENT_TOKEN_TO_BE_REPLACED

Here are the important takeaways based on the deal specifics as outlined by MJS reporters Dan Bice and Patrick Marley this afternoon: END_OF_DOCUMENT_TOKEN_TO_BE_REPLACED

Christopher seconded the idea and offered to purchase the lift, trailer and handle winter storage at his garage in Oshkosh. END_OF_DOCUMENT_TOKEN_TO_BE_REPLACED