For those of you just catching up on the news, the concept of the Bucks remaining in Milwaukee for the long haul just had its single most important day since Senator Kohl announced the sale of the team last April.

As reported by Rich Kirchen in the Milwaukee Business Journal, Governor Walker’s proposed 2016-17 State budget will include provisions for state income taxes paid by NBA players to be used to fund the principal and interest payments on tax-exempt bonds to be issued to fund an estimated $200 million dollar public contribution to a new arena. This is what has been referred to in the media as the “jock-tax”.

Most observers had expected Walker to be the last domino to fall in the sequence of events to allow for a new arena. Conventional wisdom called for the Bucks to propose a plan, the public and politicians to debate it, and, at the end of that debate Walker to weigh in with his thoughts.

Rather than wait and gauge the political winds, Walker is going to jump right into a leadership role on this by supporting the preferred funding mechanism. This takes much of steam out of the opponents of a new arena because the politician in the State of Wisconsin with the most power at the moment will not be subject to influence. Because Walker has already made a decision, a great deal of the debate and histrionics that we thought would take place will be short-circuited. We applaud Governor Walker for his forward thinking and courage to take a leadership role on this issue.

We Aren’t There Yet

While Walker’s decision will perhaps be viewed as the single most important step towards a new arena, the debate still has a ways to go. Political observers will notice that Walker’s decision to support the jock tax funding mechanism was leaked right after he announced his decision to not authorize a new casino in Kenosha. If the “jock tax” decision were announced on its own, it would have garnered the headlines across southeastern Wisconsin last night and be a major topic on local talk radio for the next few days. Our guess is that Walker believed it advantageous to foreshadow his support for a new arena while everyone was pre-occupied with the casino news.

For the new arena to be a reality, there are two remaining groups that need to be sold on the concept. The first are certain members of the GOP legislative caucus who are skeptical about providing funding support for anything related to the City of Milwaukee. The second are Democratic legislators who would normally support anything and everything for the City, but might try to chose to use the arena issue against Walker and the GOP for political purposes.

For the GOP contingent, in the weeks and months ahead, this website will continue to offer up the important fact that a new arena is one of the single best bets the State can make for keeping a profitable and important business in the State of Wisconsin. The new arena represents a valuable public-private partnership that will ensure a unique local business that generates $110+ million a year in revenue remains in the State. This is not a “Welfare for millionaires that also props up a failing Milwaukee” boondoggle that some on the right might try to imply via soundbite, but rather a good business investment for state taxpayers.

Many legislators are unfamiliar with the economics of the NBA and are unaware of the fact that much of the revenue dollars that the team generates come from outside Wisconsin via the league’s TV and merchandising contracts. This money flows into Wisconsin to be paid to employees on the Bucks payroll and is taxed by the State. Further, the State currently taxes visiting players such as LeBron James on a portion of their earnings each time they play in Milwaukee. If the Bucks go away, that income tax revenue goes away as well. Since much of the NBA payroll money that is taxed is funded with league dollars generated outside the Wisconsin market, the tax revenue from Bucks operations the State has historically received WILL GO AWAY AND NOT BE REPLACED should the team leave town.

We went the “all caps shout” route on that last sentence, as the new arena situation in Milwaukee is unique compared to many other arena debates that have been fought around the country. We don’t need to bring in Roger Noll and conduct our debate on the intangible value of a pro team to a community or whether or not new arenas generate enough economic activity to support a level of public investment. If the Bucks leave, the state will lose a business that brings into Milwaukee tens of millions of dollars from out-of-state. If you are a pro-business politician, you want the Bucks to remain here. The case for state-aid for the arena is more clear and direct than many of the other business aid and incentives that are provided to private industry in Wisconsin.

We’ll talk more in the future about the specific business advantages to the State, with a goal that GOP politicians will view the use of NBA jock tax revenues for a new arena as a win-win business proposition for everyone.

For those of you new to our site, we refer you back to these earlier pieces that provide background on why we need a new arena and its economic impact and how the new NBA TV contract is a game-changer for the Bucks and the State of Wisconsin. We’ll even point Charlie Sykes listeners to a piece we did last spring in response to his questions regarding a new arena.

The Other Side of The Aisle

Certain members of the GOP caucus (and for that matter local talk radio) aren’t the only ones who need to be respectively engaged in the process. A new arena investment carries with it $500 million to one-billion dollars in new construction for the City of Milwaukee. The project will provide a hub of economic and cultural value for an estimated 120 to 180 nights a year of use.

There is a plethora of economic benefits to a new arena complex including construction jobs, new permanent jobs at the facility and the attraction of entertainment dollars flowing into the City from not only the suburbs but people out-state as well. And if the chosen site ends up being in the Park East as we discussed in our piece last week, the City and County will finally have an anchor tenant to clean up the blighted scene visitors experience upon exiting the McKinley off-ramp from I-43.

We are asking Democratic leaders to agree to put down the political battle swords and work with Governor Walker on getting 100% support from the City and County politicians for this funding mechanism. The State GOP is still rightfully wary of the Miller Park battle in 1995, when George Petak was recalled from office and control of the State legislature flipped from Republican to Democratic control based on his deciding vote to support the Miller Park tax.

A suggested first step in this process would be for Mayor Barrett to join the Governor in supporting the proposed funding mechanism for the new arena. It also behooves Mayor Barrett to reach out behind the scenes to his own caucus and make sure the votes will be in line for this particular element of the State budget without a lot of political grandstanding. 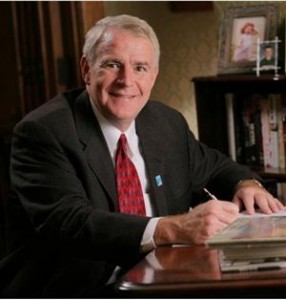 The largest beneficiaries of a new arena are Bucks fans. The second largest beneficiary is the mayor of the city that will receive a potential $1 billion dollar investment in his community while retaining his city’s NBA team. We do not expect Mayor Barrett demonstrate the same level of NBA expertise as Sacramento’s mayor, former NBA star Kevin Johnson. But it is reasonable to request that our mayor not be the missing man (as he has been to date) in a project where he’s the number two beneficiary. He needs to bring his fellow Democratic politicians in line to support Governor Walker on this funding mechanism and advocate hard for the new arena development to get accomplished. We understand he’s excited about projects like the Street-Car Project and the Couture, but the new arena development is the real prize here.

This project is one where both sides of the political aisle can work together and not compromise their core values while at the same time providing a great economic and cultural outcome for the City, County and State of Wisconsin.

Some Talking Points for the Weekend

As the news of the proposed budget funding mechanism begins to take hold, we’ll leave you with five talking points to use with friends and family regarding the new arena. Here we go:

1. Use the term “Public-Private Partnership” when referring to the arena because that is what it is. The fact is the private sector will put $300 million into a $500 million dollar community project. This is likely going to be $300 million more than the Brewers contributed to Miller Park. (In the end, the Brewers ownership never put any of their own capital into Miller Park, but that is a story for a different time).

2. The new arena is for more than the just the Bucks. While the Bucks and Senator Kohl will contribute 60% of the cost, the team will likely only use the building for 30-40% of the time. That sounds like a reasonable deal for the taxpayer. Keep those percentages in mind when people say “The Bucks should pay for 100% of this thing“.

3. Don’t let your thoughts on the project be clouded by the Bucks product on the court the past two decades. The new ownership group is sparing no expense to bring the best resources to make the team highly competitive. We are going to see the same turnaround story with the Bucks that we saw with the Packers and Brewers. (Sidebar to LED: We don’t necessarily need to win this season, keep your eyes on the long-term plan).

4. The NBA may be the sports league of the future. Unlike the NFL or the MLB, the NBA is succeeding overseas on a massive scale. That fact impacted the Bucks purchase price of $550 million last Spring. As we become a global economy, the fact an NBA team is located here provides international recognition for the City but more importantly global dollars that accrue to the benefit of a corporation based here.

5. There will be no new taxes needed for this project. The state already collects an estimated $10.7 million per year from NBA players. A $200 million dollar bond issue at current interest rates would be supported by that amount of annual tax collection.

But aren’t we leaving a $10 million dollar hole in the State budget by using Bucks tax revenues to pay bond debt service? Yes and No. As the NBA payrolls go up by 50% in two-years as a result of the new TV contract, the tax dollars collected should also go up by a corresponding percentage. Over time, any jock tax revenues diverted from the general budget to debt service will be made up with payroll growth. In the meantime, the State receives the benefit of a major business remaining here along with a $300 million dollar private investment in the City of Milwaukee. Neither would occur if the Bucks leave Milwaukee.

As Bucks fans, we will all be relieved when ground is broken, but we took a big step FORWARD yesterday. Go Bucks!