EDITORS NOTE: Since we published this piece earlier this morning, a spokesman for the Governor said the decision to not approve the Kenosha casino is final and will not be revisited. For those looking to understand all angles of this decision, this Q&A is still helpful for many trying to learn more about a complicated issue. Since initial publication, we’ve added a spreadsheet below to weigh out the benefits and risks.

By now you’ve all heard the report from WISN AM1130’s Mark Belling that reportedly the two tribes involved in the proposed Kenosha casino project will offer to pay the public portion of a new arena, which could be as much as $220 million dollars or more. In exchange for this “donation” to the new arena, Governor Walker would need to reverse his decision last month and approve the Hard Rock Kenosha Casino project that is being sponsored by the Menomonee Tribe of Wisconsin in conjunction with the Seminole Tribe from Florida.

We could have written a 10,000 word essay on the history of tribal gaming and how we arrived at this point, but for now let’s go with this Q&A.  Please read it in its entirety as we try to walk through the entire situation in a logical flow.

Q: This is great news right?  The arena could be 100% privately financed.

A: Yes and No. The arena project only receives this money if the Kenosha Casino project is approved. In 2003 and 2005, former Governor Jim Doyle negotiated amendments to the State compacts with the Forest County Potawatomi Tribe who run the Milwaukee casino. These amendments were specifically designed to prevent any future competition for the Milwaukee casino. If the State authorizes the competing Kenosha casino, the Potawatomi Tribe has the right to sue the State for damages.

Q: A lawsuit isn’t a problem is it?  The Kenosha group said they would back the State in any lawsuit and reimburse for any losses.

A: The problem is that if the State were to lose a lawsuit brought by the Potawatomi Tribe, the damages could be very high. State taxpayers would be on the hook to pay those damages. The compacts negotiated by Doyle provide that the Potawatomi Tribe can ask for a return of all the money the Tribe has previously paid the State in years past. This provision could mean the State would need to return $100 to $400 million depending on how far back a court would allow the Potawatomi to request a refund

Q: Ok, so we are only talking a couple hundred million, the Kenosha group has that covered. Let’s go!

A: That’s only the first problematic provision of the 2005 Compact. There is a second provision that would require the State of Wisconsin to reimburse the Potawatomi Tribe for any losses incurred from a competing casino should the State approve the Kenosha project.  The Potawatomi Tribe takes in approximately $350 to $400 million dollars each year in gross revenues. i.e. revenues AFTER they have paid out winners.  If the Potawatomi are able to prove that they subsequently lost $100 million in revenues every year to a Kenosha casino, they could request that money from Wisconsin taxpayers in a lawsuit.  Given that the 2005 Compact runs another fifteen years (through 2030), we could hypothetically be talking about $1.5 billion in future damages. Maybe more.

Q: Again though, can’t the Kenosha Casino simply pay the State that $100 million the Potawatomi lose each year?

A: Maybe, maybe not. We all assume that a Kenosha Casino would be extremely profitable. But could Kenosha Casino revenues fund $100 to $400 million in prior year payments to the State along with $220 million for a new arena, along with a hypothetical $1.5 billion in lost future revenue to the Potawatomi?  That is a big number and the future revenue losses by the Potawatomi Tribe are not predictable. They could be more or less than $100 million per year. Further, the State of Illinois could decide to expand their gaming operations in northern Illinois and retain the potential Illinois market of gamers who would come to Kenosha. Complicating all of this is what the future of on-line gaming is and how that might impact “brick and mortar” casinos.

Q: Can you show us the risk in spreadsheet format?

A: Yes. The numbers below show a gap of approximately $1.6 billion in risk should the State lose a lawsuit to the Potawatomi regarding the gaming compact. We admit this is our estimate and a worst case scenario. We are open to any and all corrections and critiques to the table below. The only reason we are publishing this is because none of the other parties to date have been willing to put this analysis in a simple format.

Q: What happens if the Kenosha Casino can’t fund all those payments you list above?

A: The Wisconsin taxpayer will then fund them. It could blow a giant hole in the State budget for the next 15-years. The Menomonee have promised to cover all potential losses, but have not posted a bond for $1 or $1.6 billion, only for $275 million. The Kenosha casino should theoretically have the future revenues to cover this but there are no guarantees.

Q: I heard the Bureau of Indian Affairs said they think the provision in the gaming compact regarding State reimbursement of lost profits at the Milwaukee casino might be against public policy and thus unenforceable.

A: Yes, they did say that. And that ruling from the BIA is a very compelling case that could help the State win any lawsuit brought by the Potawatomi. However the current compacts allow both sides to take disputes to court. Any single judge could make a ruling that the State freely entered into the 2003 and 2005 amendments with the Potawatomi Tribe and the contract needs to be enforced as written. And no matter what a judge would rule, the other side would likely appeal. This could take years to resolve in the courts.

Q: How would that timing affect a new arena?

A: The new arena project needs to get started in the next year. The contractors involved will need to be paid the $500 million or so for the cost between now and a 2017 completion date. Neither the Bucks nor the State can wait around for years to let the courts resolve a gaming lawsuit.

Q: Ok, well then should the State and the Bucks forge ahead with the “jock tax” proposal so we get this arena built before the 2017 deadline imposed by the NBA?

A: The jock tax proposal is now at risk of being approved by the GOP controlled Wisconsin legislature. Many key GOP legislators and GOP voters may be angry if Governor Walker does not take the $220 million in exchange for approving the Kenosha Casino Project. Further, these GOP legislators are still waiting for some level of funding commitment from the City of Milwaukee and Milwaukee County.

Q: How do MIlwaukee Mayor Tom Barrett and the Milwaukee Democratic contingent play into this?

A: Who knows. This proposal has changed the political calculus. Probably the best solution would be for the Forest County Potawatomi Tribe to step up and invest $250 million in the new arena in exchange for naming rights and obviously no Kenosha Casino.

Q: That’s a great idea. The Potawatomi can do this!

A: It is a great idea. The Potawatomi can avoid any litigation costs and the uncertain risks of it on their part by stepping up here. They also don’t need to come up with the $250 million right away, but rather could be obligated to pay $15 to $20 million per year in gaming revenue to the State to cover the principal and interest on $250 million of bonds for a new arena. 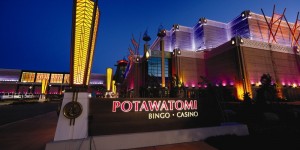 Q: Why won’t that happen then?

A: Because up until now the Potawatomi Tribe has held firm and refused to give an inch on any of this. They insist their agreements with former Governor Jim Doyle were made in good faith and will be found enforceable. We aren’t sure they will budge off that point.

Q: Will the new arena get built?

A: We still think the new arena is a likely to get built. However, all parties, including the Bucks will need to work through these issues in the coming week. The offer of Tribal funding could be a fabulous solution if the Kenosha group truly can put up all the money needed to insulate the State from liability, however that is a taller order than most realize. We are still very confident the new arena will get done in some form, but these issues will need to be worked out. We await the details and the debate.

For the moment, let’s enjoy the product on the court.  Go Bucks!

One thought on “Q & A: Tribal Gaming and the New Arena”