FALSE.  We already have the “Jock Tax” in place in Wisconsin.

After soaking up 72-hours of conversation on the arena among friends, relatives and people posting online, we’ve come to an important conclusion —- A segment of Wisconsin residents, certain pundits and perhaps even a handful of legislators do not understand that the “Jock Tax” is already in place and collecting millions in income tax from pro athletes who perform in the State of Wisconsin. As we highlighted in our piece the other day, Wisconsin has had what is known as a non-resident entertainer tax for decades now.

When details of the new financing plan leaked out last Wednesday, some pundits were incredulous. We wondered why their objection to the new plan was so much greater for this plan versus the “Pay Their Way” plan announced by Governor Walker back in January.

We believe that a number of people were confused by the term “Jock Tax” and simply assumed that with the original plan, the State was going to implement a brand new tax reserved solely for NBA players and that such revenues would be used to pay the debt service on arena bonds. When they heard the new plan, there was an assumption that somehow the NBA players were off the hook and that “Joe Lunchbucket” now would have to pay for everything.

The only difference between the old plan and new plan is that the new plan requires a lower contribution from the State and greater contributions from Milwaukee based entities. The “Jock Tax” exists under either plan.  Under the new plan, the State is keeping a larger portion of the income tax (“Jock Tax”) collected by NBA players with those revenues being used for roads, education, social services and everything else funded by the general budget after the State’s portion of bond debt service is paid with these revenues. This is because the Milwaukee based entities are picking up a greater share of the public financing component in the revised plan.

When Governor Walker introduced the original plan back in January, the primary reason he believed it to be a good deal for Wisconsin is because if the Bucks leave, the State will lose all the income tax revenue they ALREADY COLLECT under the existing “Jock Tax” from NBA players, estimated at $6.5 million per year in 2014 and expected to grow significantly in the future.

Here is a graph that Walker used in his presentation in January that illustrates the tax revenues NBA players pay currently and are projected to pay to the State in the future. 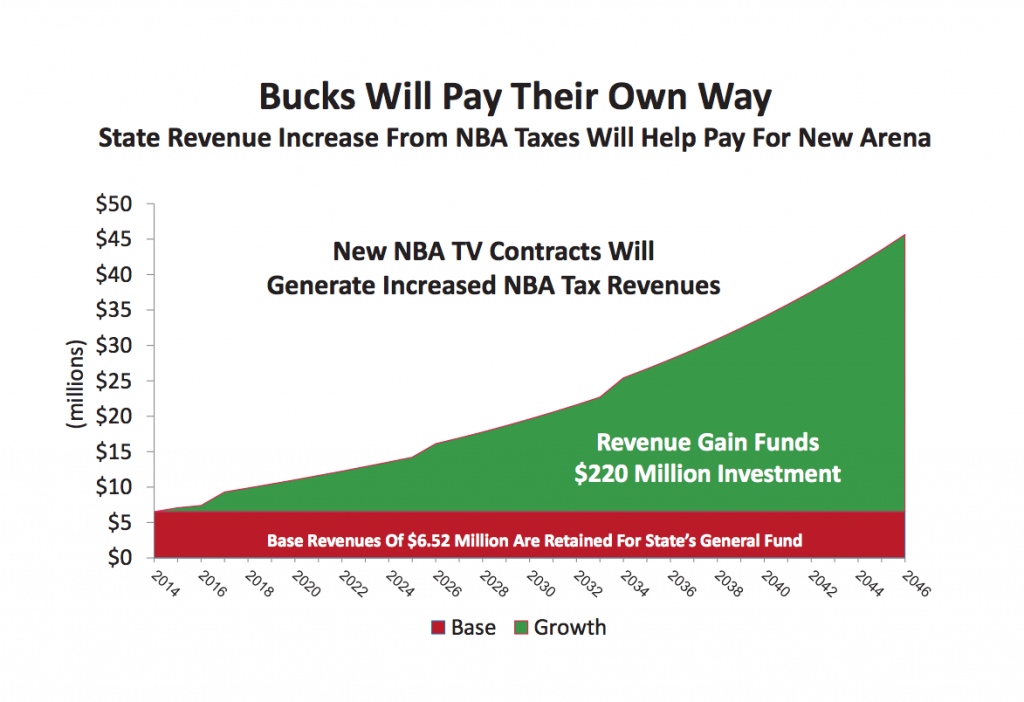 Focus on the red and green amounts in the graph above. The red represents the amount of money the State collected from NBA players last year. The green represents the additional revenue the State projects to collect from NBA players over the next thirty-years. As Governor Walker stated, due to the new TV contract the league signed last fall, the State is in line to start collecting $10 million per year starting in 2016-2017 with that number growing further in subsequent years.

Now, how much would it cost to pay debt service on State issued bonds for a new arena with the new financing plan?  Let’s assume that the State issues bonds and sells them to the Public Land Trust under these scenarios.

Study the chart above closely. We have three scenarios outlined as to how existing NBA player tax revenues pay for the State portion and even the County portion of the bonds to be issued while leaving money left over as a surplus to the State treasury for general fund purposes. We added in the County scenario using a nuclear winter worst case scenario that none of the uncollected debts the County would assign to the State could be collected and the State would be responsible for everything. (Although the Journal Sentinel’s Don Behm reported this weekend that those uncollected debts do have some value to them)

We aren’t showing any of the “out-years” where the State is still paying a fixed amount on the bonds but is now pulling into the State’s general fund $10 to $20 million dollars in annual surplus tax revenues even after netting out the bond debt service. So over the next decade, the State is not only retaining the money it currently takes in from NBA players for general budget purposes but covering the primary bond debt service. Further, since the bonding amounts are so much lower than the prior plan where the State covered everything, the State should now make a nice surplus over and above these baselines.

You can run many different bond scenarios but these are the primary points for Bucks fans to know:

Please send this link onto family and friends. It is important that Bucks fans and arena supporters understand the math and why many view a new arena project as an economic winner for the State before we even get into the other benefits provided.